Accepting goods and services classed with the Nice Classification


I can't believe this has been going on since 2014.  Anyway, the Canadian Intellectual Property Office posted this on its website on January 3, 2017.

It is also with great pleasure that we announce Canada’s display of acceptable Nice 11th Edition goods and services to be reflected in WIPO’s Goods and Services Manager.

Accepting goods and services classed with the Nice Classification is part of our commitment to align our practices with international standards helping to attract foreign investment in Canada and support Canadian businesses, innovators and inventors to compete with the best in the world.


You can see it here.

Don't get too excited! This doesn't mean that those “non specific” Nice classifications will all be acceptable. But the Manager does tell you what is or isn't acceptable 😉


On another note, Canada is celebrating its 150th birthday this year. In recognition of this, Trade-Mark Registration Certificates now feature the 150 birthday logo instead of the three autumn maple leafs.

There are other, much more interesting, things going on too.   Ottawa 2017

This might just be a good year to make that long postponed trip to Ottawa.
Posted by Nicola M. Hunt at 1:23 PM No comments:

When I was in University I had a part time job as a projectionist. I got the gig from my brother who got it from my other brother. I rarely did in-class movies; it was too stressful. But I had two nights a week where I ran the projectors in the booth (safe from the jeers of the audience if things went wrong with the projectors – which they often did). There were two projectors and most movies were three reels, the change over had to be specifically timed. You set up reels one and two before the show and could make sure everything was perfect. (Do you remember those big circles in the upper right corner of the screen? That's what they are for.) The third (or more) reel got set up in the dark and was always a crapshoot. I got paid (a hefty wage, actually) to watch a movie. It was glorious (except for when things went badly).

Going to the movies and just setting back and watching is one of my favourite things. I'm pretty indiscriminate; I don't judge, I just enjoy. I am always more than willing to suspend my disbelief.

The home movie industry (video, DVD, streaming) is a mixed blessing for me. I love that I can watch a movie whenever I want; I hate that other people can pause it whenever they want. That's why I still go to the theatre. Well, that and the big screen. My new 55” OLED 4K is great but it can't compare to the big screen.

I remember reading that movie makers would have to improve the cinema going experience rather than fight a losing battle against the pirating of movies. Well, let me tell you, they have done it! 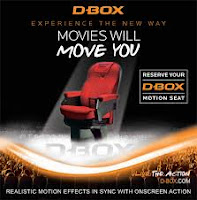 Last night I went to Rogue One in Dbox 3D. Dbox is an “immersive cinematic motion experience, which is in sync with the action on the screen, immersing viewers in the movie to the point where they literally feel part of it. ...each and every movement of the D-BOX enabled cinema seats reflects the actions and emotions portrayed in the movie.”(click here for more info)

WOW! Once I got over the giggles of being jiggled around, it was amazing.

I really recommend this. Just remember it is not a simulator or an amusement park ride so don't go in with that expectation.
Posted by Nicola M. Hunt at 9:05 AM No comments: