Today I “attended” an email marketing webinar. It was put on by an email service provider – it facilitates email marketing. According to the presenter, 68% of Canadian consumers prefer emails as the way to receive brand information; only 5% want it via social media (what a shock, considering the source – haha).

The webinar started with a discussion of something called a Share Button which email marketers should put in all their emails to enable the email's recipients to share the email message.

Well that triggered my interest!

IS SHARING AN EMAIL SPAM?

You may remember being inundated (and likely annoyed) with “opt in” emails because of CASL (Canada's Anti Spam Legislation) which was all the rage last summer -- if you don't know about CASL you could read my post here. Since the legislation took effect, over 300,000 complaints of spam have been reported to the CRTC; over a quarter of which were about the same company. So far three companies have been fined. On a more positive note, spam originating from within Canada – not from overseas – has dropped 37% since July 2014. But I digress...

Was sharing a marketing email spam? Probably not; after all it's not on you if somebody else forwards your email to someone. But as it turned out, the Share Button only encouraged and enabled the recipient of the email to share to social media not actually forward the email so it cleverly avoids the whole issue.

Anyway, the takeaway from this? Emails rule and using share buttons can increase your email lists. Well, according to an email service provider.
Posted by Nicola M. Hunt at 1:22 PM No comments:

A few weeks ago, my husband and I hiked the North Rim and Long Range Traverses in Gros Morne National Park.

Gros Morne is a UNESCO World Heritage Site. The hikes took us along soaring fjords, Western Brook Pond and Ten Mile Gulch, up and down barren cliffs and through mountain meadows, bogs and forests.  We saw moose and caribou and picked bakeapples (a berry indigenous only to Newfoundland and Labrador).

It was extremely challenging; in fact you have to pass a “test”regarding orienteering skills (ie. can you read a map), accounting for declination and back-country safety.

If anyone is thinking of doing this hike or looking for a challenge for next summer, you might want to check this out! 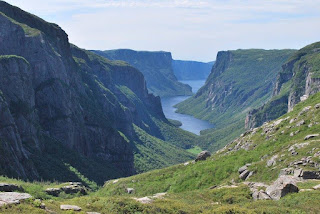 A year after becoming law, CIPO has finally announced some real movement towards the implementation of our new Trademark law. Starting this fall, CIPO will be accepting trademark applications filed with their goods and services grouped and classed according to the Nice Classification of goods and services.

In addition the online search capabilities will be enhanced to give the user the ability to search the database for marks filed within a particular class of goods and services.

Read the official announcement here:Coming soon: the Nice Classification
Posted by Nicola M. Hunt at 7:46 AM No comments: